We’re leaving for the charming Fort Worden in about an hour, Gentle Reader, where my uncle’s funeral will be held. Auntie L. has promised oysters on the half shell, as it was one of Uncle George’s favourite dishes, as well as a “variety of exotic delicacies, my darling. You know.” My cousin, who came out as trans* immediately following my grandfather’s death, will be herself in front of the extended family for the first time – although, at Thanksgiving, we have news that my cousin-in-law D. was, in fact, being a bit of a d-bag about it. He has refused to ride in the same vehicle with T. to the funeral. I know that if he makes a comment in my hearing, I’m challenging him. I’ll let you know if it comes to fisticuffs.

Sunday, foolishly, I have double-booked myself – with an old, very dear friend, and an old beau who I haven’t seen in a year or two. There is a possibility that I can reschedule the beau to Monday instead, which would be ideal, then it’s oars out for the Farm on Tuesday, with any luck.

At any rate, I’ll try to keep you posted, but posts may be scarce on the ground for a few days – just giving you notice. Excelsior!

So, before I get right royally swiffy with my cousins, as per family tradition, here’s a low-resolution photo of my Uncle George. Yes, he had a mohawk while pushing seventy. 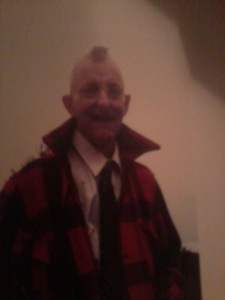 Madame DeLyte has suffered a grave disappointment - YET AGAIN - and still believes that freedom, beauty, and truth are what's valuable, rather than vulgar cash. He'd add love to that list - but, well, what can he say about love?
View all posts by Ty DeLyte →
This entry was posted in Updates and Other House-keeping Posts and tagged Asides, Interludes. Bookmark the permalink.