TALES FROM THE BUTCH SIDE

You may have noticed that I have trouble passing as straight these days, or desiring to pass as straight. In fact, I’ve publicly stated that I never want to be mistaken for straight again in my life. However – sometimes, circumstances dictate that one must venture into the lair of the beast. In this case, I was compelled to attend a friend’s birthday party at a self-proclaimed redneck bar in the middle of Belfair, Washington – and it’s hard to find a smaller town than Belfair. It seemed self-evident that if I carried out my standard self-expression, I would wind up a martyr, like Matthew Shepard or Brandon Teena. Naturally I took to social media to inquire how to pass to avoid being murdered.

I got some excellent suggestions from various people – to think of it as a cultural exchange, to think of it as a sort of reverse Halloween in which the goal was to look my least fabulous, to think of myself as Jane Goodall amongst the chimps. I took off my ever-present stealth pearls, donned a plain black t-shirt and the only jeans I own – which are a misses size 12 – and the kickass boots I mentioned in the last post. My uncle Syn reassured me that they’d just mistake me for a hipster, so while I was still nervous, I girded my loins and went. 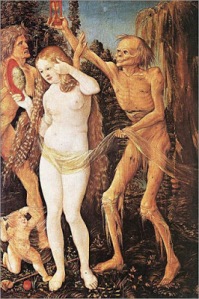 The loins are girded, but nothing else is.

I tried to summon all the rules I used to use to try to pass, when I still wanted to do such a thing. Always look slightly pissed off – slouch – don’t use none of that high-falutin’ language that is bread and butter to you – never touch another man ever, apart from handshakes and bro-hugs – and if you’re doing a bro-hug, one sharp clap on the back, not two, unless you’re exceedingly intimate, and make sure to break away as soon as possible, as if affection itself is super icky. You know the sort of thing.

So no shit, there I was, there in the Lion’s Den, and it wasn’t nearly as bad as I had thought it might be. I actually managed to have a decent time – especially as I confessed to the birthday boy – and everyone else in our party – that I am not super great at playing butch, and they all swore that if shit got started, they’d have my back. I felt pathetically grateful, as one does, and while that in itself bothers me, I still have that gratitude.

As the evening wore on, my confidence increased, and I began dropping the act – only a little, mind you, but the alcohol certainly helped my confidence and I’m not very good at the whole straight thing anyway. We ran into Jemily’s sister, Andi – and as it turns out, Jem doesn’t speak to either of us. We bonded. Miss Heidi and I went to sign up for Karaoke – we were going to sing Elephant Love Medley from Moulin Rouge, as it was in the book, but the hostess couldn’t find the song; we wound up singing I’ve Got A Lovely Bunch Of Coconuts instead, and actually brought down the house. I have no idea how that happened – but Heidi and I were actually singing in the same key, which was a feat all by itself.

At any rate, Gentle Reader, while I would certainly not go to the redneck bar by myself, I had an excellent evening, and would go again with the right crowd.

Madame DeLyte has suffered a grave disappointment - YET AGAIN - and still believes that freedom, beauty, and truth are what's valuable, rather than vulgar cash. He'd add love to that list - but, well, what can he say about love?
View all posts by Ty DeLyte →
This entry was posted in Adventures, Drama and tagged Belfair Washington, Gay Boys In Redneck Bars, Passing Privilege, Redneck Bar, Straight Bar, Straight Boys, Straight People are so very strange. Bookmark the permalink.