In Which We Explore Online Dating

Gentle Reader, are you familiar with online dating? I’m sure that you’re aware of its existence, and that people have hilarious stories about the photos in profiles being decades out of date, but have you experienced it? Within minutes of setting up a profile for my mother, for example, she was messaged by a 93-year-old man with a diaper fetish. No joke.

I’ve repeatedly talked about the fact that I really don’t date much*, but for years I kept a profile up on OkCupid, just in case. I ran into a few of the fellas from there once or twice – out at the Mix, we’d recognize each other from the Internet, but mostly I just used it to talk to people, find out that the guy was looking for one thing, and it wasn’t exactly romance. 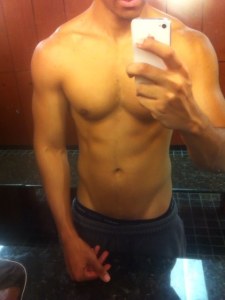 Typically, if this is the gent’s profile picture, he doesn’t want to meet for coffee.

Well, I finally found a gentleman who was interested in conversation, and with similar interests to mine†. We wrote back and forth for ages, and he was pretty much exactly perfect. After three months or so of this, we decided to meet in person.  We arranged to meet on a Sunday; I took the bus to our meeting spot, and got into his car.

You might be tempted to think that this is the part where he turns out to be an absolute lunatic and I end up getting axe-murdered or something. You would be wrong; that part comes later. What happens at this point is that we drive down to the St. Helen’s district of Tacoma, which is one of my favorite parts of town; the historic buildings are gorgeous, the theatres are nearby, there are interesting local shops and breweries and independent bookstores, and statuary litters the sidewalks. In the pale cool sun of a spring afternoon, we strolled, hand in hand. Though tepid at first, our conversation warmed, and soon we were chatting away as we did online. 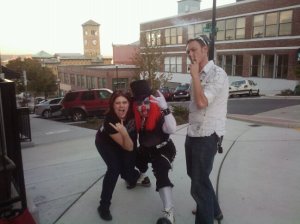 Best photo of this part of town that I could muster. The clown is not my date.

We immediately conferred the title of “boyfriend” upon each other, and went up to the Mix, where – after discovering that he was a psychologist, I spent the rest of the conversation thinking that he was psychoanalyzing everything that I said. He laughed when I confessed that, and reassured me that he was off the clock – unless there were things that I wanted help working through?

Well, if you get a few drinks into me – which he did – and invite me to open up, you have only yourself to blame. It wasn’t long until I was discussing my family’s dirty little secret of mental imbalances, and it’s not such a long step from there to self-medication, and at that point it just seemed natural to disclose my rape. There was a break-down, and some tears.

Then he got into his car and left. Not because I was some crazy guy that he met on the Internet, but because I had friends who were coming to meet me, and he had to go to work that evening, and it was the agreed-upon end of the date. As I struggled to compose myself, I wondered if I’d ever hear from him again, after that. I did, as it happens.

It doesn’t take much to make me run from romance, though. After entering into any sort of romantic situation, I begin to panic, to struggle, to attempt to flee. This case was no different. Despite the fact that he contacted me right away, and we talked as we did before, and the fact that he’d helped talk me through some of my severest issues and hadn’t run – despite all of this, I still began to edge away. I can’t help it. He was a nice guy, fairly attractive, and willing to help me, and I slowly stopped contact. 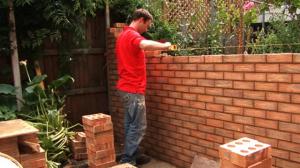 This is what it looks like in my head, when someone wants to get to know me better.

At this point, I hadn’t heard from the young man at all for about two weeks. I felt guilty, as one does when one apparently has to shut out kind, understanding people, but I consoled myself by feeling that I was freeing him to date people who aren’t emotional wrecks. I was taken completely by surprise one evening, then, when I received twenty phone calls from him in thirty minutes, completely out of the blue. Further, this is the quickest way to hit my panic buttons.

The texts began: cajoling, pleading, eventually threatening. I explained via text that he was triggering me; he didn’t care. He began to get angrier and angrier, and his previously eloquent words – which are what attracted me to him in the first place – became weapons. He announced that he was going to hunt me down; he told me that I’d better be dead in a ditch somewhere, because that was the only acceptable excuse for not taking his calls; on, and on, and on. He knew that I’d be at the Mix, because it was Sunday; he said that he was coming to find me. 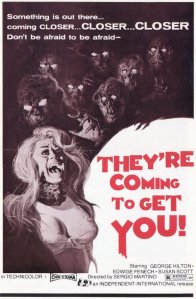 I hightailed it out of there as fast as my designated driver could drive.

I have since lost access to my OkCupid profile, which is just as well, because every few months I still get a message from him. He’ll sometimes track me down on other sites, like Facebook, but I always block or ignore him; he has created fake profiles to get around that on a number of occasions. Here I was, thinking that I was the crazy one.

*I really don’t date much, but apparently I have a million stories about dating, somehow, that end up here. I don’t understand it, myself.

† Fortunately, these similar interests were more along the lines of poetry, and did not include the taxidermy. Who knows what might have happened?

Madame DeLyte has suffered a grave disappointment - YET AGAIN - and still believes that freedom, beauty, and truth are what's valuable, rather than vulgar cash. He'd add love to that list - but, well, what can he say about love?
View all posts by Ty DeLyte →
This entry was posted in Adventures, Drama and tagged Boys, Crazy Stalkers, Dating, I almost died y'all, LGBT, LGBTQIA, OkCupid, Online Dating, Relationships, ReRuns, The Mix. Bookmark the permalink.

4 Responses to In Which We Explore Online Dating