Which Contains A Surprise

2015, Gentle Reader, is the year in which the bulk of those in my most intimate circle turn Thirty. It’s a milestone, and it deserves to be made much of. My dear Mr. Darling was the first to turn, and – well, we decided to try to surprise him. Our Darling’s not an easy fella to get a jump on, but – well, you’ll see. Credit for the party photos goes to Miss Addams, a friend from the good old days, who we’re so glad was able to attend.

The Task: Throw a Surprise Party

The Execution: We spent months mulling over ways we might be able to surprise Darling. We’d already started making plans when we attending his housewarming at The Phag Pad; I let slip that something was in the works – well, I had to, Gentle Reader: he was planning a series of trips around the country, and since his last several birthdays have been just dreadful, he didn’t want to even acknowledge the day, and planned on being out of town. I just had to tell him, to make sure he was available at all, you know.

Ms. Capere and I got Mr. Lewis, Darling’s roommate, in on everything – we’re still getting to know him, but it was very interesting working with him on this project. Lewis knows Darling from a completely different part of his life than we do. Darling doesn’t often like to mix his worlds, but we’re all aware that we’ll all be around for years to come, so it’s time that we made friends. He’s the one who suggested the theme, since Darling had been obsessed with it: Mesh.

Lewis, Capere, and I met a week or two before the actual party to solidify our plans, commiserate over things that just didn’t gel, and to work out last-minute details. I arranged for Darling’s whole family to take him out to dinner a few nights early (It was entirely Mrs. Darling’s decision to take him to the Space Needle to dine. She’s an absolute doll, and of course she was going to treat her son on such a big occasion – but I’m so glad she was able to shift her plans so that we could work together. You’re a treasure, Leigh. And you too, Bill.)

Treasures. Also, I’m sorry that the only photos I have of you that are readily available are from that vacation you took me on! Thanks again! ❤ ❤ ❤

The day arrived – the Sunday before Darling’s actual birthday, since he’d specifically said that Sundays are best for him. Luckily, he’d forgotten that – he was expecting something on Wednesday. In fact, he had been passive-aggressively texting Capere about his “surprise birthday plans” because he was trying to plan around them that very day – he clearly knew nothing.  We sat in the dark for an hour, playing party games, and Leigh texted me again – they were finally on their way – for real this time. God, it was gratifying when he walked through that door – he shrieked, he cursed, he was actually shocked; the surprise was genuine.

And then it was time for cake, and singing that song that Darling hates – how does it go? Oh, yes: HAPPY BIRTHDAY TO – well, you get the idea.

The Verdict: Duh. Obviously. I love parties, I love themes, I love my friends, and I’ve known Mr. Darling for twenty-five years now. This was great, even if I got a little maudlin on the ride home (Sorry, Andrea!) and I wouldn’t hesitate to participate in an event that was so singularly focused on making a dear friend feel loved. This was a win all around. 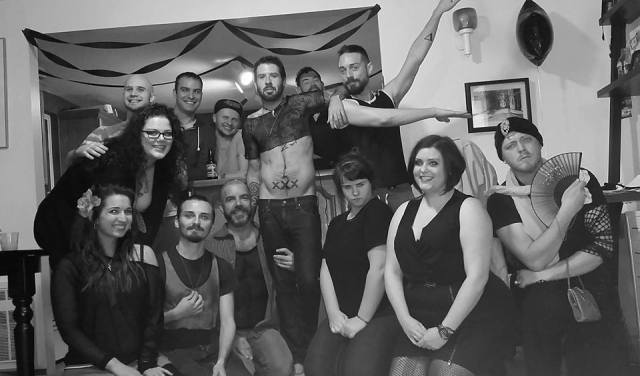 Madame DeLyte has suffered a grave disappointment - YET AGAIN - and still believes that freedom, beauty, and truth are what's valuable, rather than vulgar cash. He'd add love to that list - but, well, what can he say about love?
View all posts by Ty DeLyte →
This entry was posted in Adventures, Etiquette, The List and tagged Darling and Capere, Entertaining, Fishnet, Mesh, Mr. C. W. L. Darling, Surprise Parties, The List, Thirtieth Birthdays, Throwing a Surprise Party. Bookmark the permalink.