Gentle Reader, I’m a strong believer in being Culturally Literate. There are so many films I’ve just never gotten around to seeing over the years – what are the foundations of film? As you may have guessed, educating myself about Film is on The List. My requirements for including a film are loose, but I wanted to make sure that every film included was available on Netflix.

The Task: Familiarize Myself With Classic Film

This time around we have just two films, because I’m finding it hard to be concise. This’ll be a long post, Gentle Friend, so strap yourselves in. We begin with:

And then Marilyn Monroe and her broke friend move in!

Shenanigans are afoot, which the three keep slyly referring to. Much like Fight Club, there are rules, and “the first rule of this proposition is that gentlemen callers must wear a necktie.” The Divorcée explains: all three of them wish to marry rich, and it’s easier to do that in a glamorous apartment with a fashionable address. Duh. They’re all to pool their resources until one of them can land a husband with at least six figures. Our three leading ladies sit down to dream and scheme.

After three months of failed dates – gents without a cent, you understand – one of our lasses happens to meet a man who snags them all invitations to what is basically Cinderella’s ball. Nothing but oilmen! And bankers! They score dinner-dates after the ball, with varying degrees of success. When they go to bed, they dream of the wealth they plan on marrying.

Each of our gals gets her own subplot with her beau. Broke Friend winds up with the measles in a cabin in Maine – and her guy’s MARRIED, the louse. Broke Friend accidentally falls for this guy who seems like he’s her beau’s servant or something? It would appear that it’s alright for her to fall for him because she thinks he owns just oodles of property, but he’s actually just a forest ranger. Whoops. The first fella takes her home by car, using back roads so that no one will know he’s been cheating on his wife. Unfortunately, he’s driving the fifty-millionth car across the George Washington Bridge, and there’s a photo opportunity.

Meanwhile, the Divorcée brings her fella back to the apartment. She’s about to talk him into proposing, but Marilyn Monroe ruins everything. He leaves, despite her protests.

Luckily, Marilyn Monroe is engaged! But the guy might be a phony.

There’s been a subplot this whole time about Marilyn needing glasses, so when the skeezy dude asks her to fly to Atlantic City and meet him, she HILARIOUSLY winds up on a plane going to KANSAS City. Due to ANOTHER wacky mix-up, she’s sitting next to the owner of the girl’s apartment – and he’s on the run from the law. They fall in love because he tells her that she looks good in glasses.

Don’t be absurd. Men don’t make passes and all that.

Similarly, Divorcée has been turning down advances from a mechanic the entire time, because her Ex-Husband was a grease-monkey. But, with the rich beau out of the picture and the other two girls M.I.A., she starts giving in to his advances.

But then the FIRST fella shows up! The loaded one who went away!

When Marilyn Monroe and Broke Girl get back to the apartment from their long sojourns, they step right into a wedding ceremony! Surprise! But the joke’s on the Divorcée – they were BOTH married while they were gone. So Divorcée walks down the aisle -just to turn right back around and march out. She tells the rich dude that he’s too nice to be married to someone who doesn’t love him, and he deduces that she’s in love with some young guy. She has the grace not to deny it. So the rich chap goes to find the schmuck she loves – not to give him what-for, but to congratulate him, because now the Schmuck is marrying the Divorcée. Like, right now, bro.

The three dames and their three new husbands go out for hamburgers, because none of them netted a millionaire – except the Divorcée secretly did, because secretly the Schmuck was loaded the whole time! Of course!

Up next we find:

We open with another broke girl, but this one is a Manic Pixie Dream Bore, not the comic relief. She likes to window shop! Her name is Audrey Hepburn.

Despite the dress and the pearls, I promise that she’s poor.

Brace yourselves, Gentle Reader. I had to watch this a second time, because I didn’t take good enough notes on the first round, and I really didn’t care for it. Ugh.

Everyone knows about Racist Mickey Rooney in this movie, right? I mean, people discuss it as the film’s Sole Flaw, and how the portrayal is a Product of Its Time. Um. We’re less than three minutes into the film, and we get this:

Racist Mickey Rooney must “ploteeeeessssst!” because Audrey lost her key a couple of weeks ago, and she keeps buzzing his apartment so that he can let her into the building. Already, she’s kind of a bitch.

Anyway, a broke writer moves into the building. His name is Paul, but he’s called Fred. He makes friends with bitchy broke Audrey.

Also there is a cat. 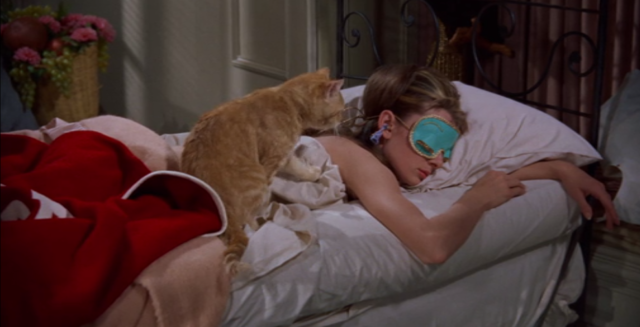 Our Manic Pixie Dream Prototype is then alarmed by the fact that it’s Thursday.

She has to visit a man in prison, you see.

Oh, no, nothing worrisome, my dears – no foul play. She’s being PAID, you see. And also inadvertently carrying messages for a mafia don. You see? But don’t worry about that. Our Penniless Writer protagonist has to meet his Sugar-Mama! Whoops! She actually leaves cash on the night-stand, in addition to paying the rent. “Fred” is officially a kept man. When Audrey sees what Sugar-Mama has paid Fred for his services (she comes in through the window as Sugar-Mama is leaving) she implies that she is ALSO paid for her services. This is risqué. It’s also rude to just come in through people’s windows, Audrey.

After some tension, Miss Hepburn throws a party dressed in a towel. 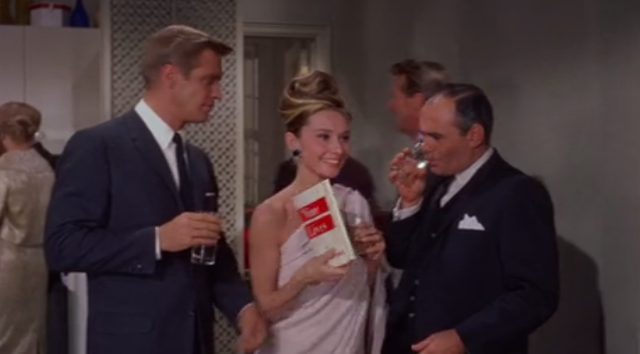 Also, she also introduces our penniless Writer to her Hollywood Agent, which (outside the scope of the film) will make his career. Audrey and Penniless Fred might both allude to their canon bisexuality during this scene; lord knows it’s the only time it comes up. And then everyone who matters escapes before the police raid.

Our writer actually pecks out a few sentences halfway through the film, which I can sympathize with. Hepburn interrupts with an insipid song from the fire-escape below, though. Yes, I know the song won awards. It’s still insipid.

Also, Sugar-Mama is being stalked. It’s a Situation. The Truman-Capote-Stand-In takes charge, even though he only accepts cash. Luckily, it’s just Audrey Hepburn’s husband, Jed Clampett, looking for his child bride – Sugar-Mama can breathe easy. Audrey Hepburn, however – well, Jed explains that he married her when she was pushing 14. He’s in his late sixties. Gross. Like, super gross. Why do people like this flick?

Audrey begs Our Hero to come to the train station with her ostensible husband whose marriage to her has been allegedly annulled. Author goes along to make sure that, you know, the child-predator doesn’t, um, yeah. 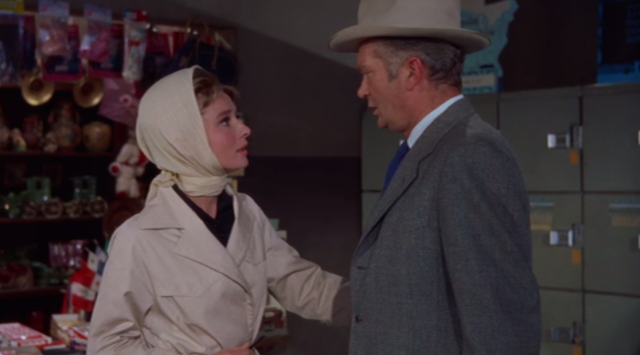 So Jed Clampett uses Audrey’s brother’s future to threaten her, but she can’t be cowed any longer. So that’s a thing. And then THIS happens:

They’re at a strip club, and Audrey gets rather drunk; She informs Writer-Mary-Sue that she’s getting married so that she’ll be financially secure. He gets pissy.

There is a scene where they’re both still poor. They discuss marriage. This is foreshadowing, and the way it’s phrased neatly erases EVERYONE’S bisexuality. They drink champagne at breakfast-time. Also, it turns out that Tiffany’s Fine Jewelers engraves cracker-jack rings. Which you can’t get anymore. We proceed to a scene where Author signs his only published work – a copy in the New York Public Library, anyway – and he gets yelled at. Then they steal things, and don’t get yelled at.

Then they make out and it’s a THING, but don’t forget about the rich guy. Everyone is still trying to pay the rent.

Audrey informs What’s-His-Face that she’s marrying this rich South American from that Party, and What’s-His-Face gets all pissy AGAIN. So Miss Hepburn starts swirling around like a dervish smashing things up. I think that this counts as a fight scene.

And then she’s crying again. Audrey is, just, like the worst drunk.

But her brother just died, so I get it. Paul goes away. He comes back in the next scene, and so does the Brazilian Engagement, which I thought was off. Whatevs. The pair go out because Hepburn ruins dinner – she’s the WORST! – and when they come back, Racist Mickey Rooney has the police in to arrest her. Did I mention? Audrey’s been visiting a mafia kingpin in prison for cash.

Hepburn isn’t getting married anymore, but once bail’s been posted, she insists she’s still going to South America. What’s-His-Name has fetched her clothes and Cat, and insists that she can’t flee the country and also that he loves her. Hepburn responds by kicking her cat out of the cab. Bitch. They yell some more, there’s an Engraved Crackerjack Ring Situation, and he leaves her crying – which she deserves. Dude goes out looking for the cat.

Audrey eventually follows, and finds him –  looking for the cat she just heartlessly hurled out of the cab. They find the cat! Then they kiss in the rain, which doesn’t happen in the book. The cat is squished between them. And that’s the end, thank God.

The Verdict: Marilyn Monroe plays naïve rather well. I can’t tell if Audrey Hepburn’s character in Breakfast at Tiffany’s is naïve playing jaded or just an awful human being*. This project isn’t over, of course, but it’s a lot broader in scope than I’d meant it to be.

*Uncle Truman’s story is much more palatable than the film. I mean – I get it, we all love sordid details and salacious vicarious living. The story he wrote is semi-autobiographical! It’s delicious. But in the film Holly comes off as rather more an unkind bitch than in the book. Just throwing that out there. Also? Explicit bisexual representation is erased in the film, so, um, that.

Madame DeLyte has suffered a grave disappointment - YET AGAIN - and still believes that freedom, beauty, and truth are what's valuable, rather than vulgar cash. He'd add love to that list - but, well, what can he say about love?
View all posts by Ty DeLyte →
This entry was posted in Musings, The List and tagged Audrey Hepburn, Classic Film, Film Reviews, I just really can't stand Holly Golightly, Marilyn Monroe, The List. Bookmark the permalink.